On 19 April 1879, at Broadwater, Joseph married Susan Hay of Heene, Sussex. He gave his address as 7 Graham Road, Worthing and occupation as carpenter. The witnesses were his brother and sister, Alfred and Kate Lelliott.

Susan was born in Tenby, Wales in 1854 the daughter of John Hay and Elizabeth Belt. Her parents were married in 1843 and her mother died in 1860 when Susan was only six. Her father was a coal miner but Susan gave his occupation as carpenter.

Joseph is always recorded as a carpenter in the censuses but he was a lot more than this, starting a building and blind making business in the 1880's which was in the family for more than 90 years, being sold in the 1980s. The blind making side continued trading under the Lelliott name in Worthing until 2020. 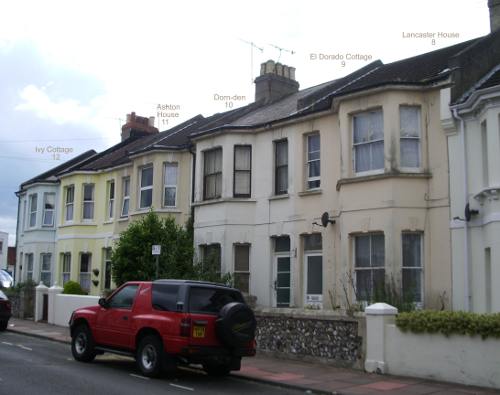 (the road has since
been renumbered)

In the 1880's Joseph and his brother Frederick, a bricklayer built a row of terrace houses on the west side of Gordon Road, Worthing. The 1883 rate book shows only two of the houses, both owned by their occupants. Joseph lived in the far right house named Lancaster House, presumable after his grandfather Lancaster Lelliott, and Frederick lived next door. By mid 1886 Joseph and his family were living in the upstairs of the end house and Frederick downstairs. Fredrick still owned the adjacent house but he rented it out. The newly built third house in the row was also owned by Fredrick and rented. In 1889 plans submitted by Joseph for number 15, which was to be the last house in the terrace, were approved. This house was to have a narrow passageway on the left side giving access to the alley which runs along the back of the terrace. The upstairs was to be built out over this passageway making it slightly larger than the other houses. The 1905 Worthing Street Directory shows the last house on the east side of Gordon Road to be Vainona (number 13). I do not know whether numbers 14 and 15 were ever built, but they are no longer standing. Number 13 has also been demolished.

By 1891 Joseph had moved into number 13 calling it Imrie and Frederick lived next door at Ivy Cottage presumably called after his only daughter, Ivy.

In 1899 Joseph took out a full page advertisement in the Worthing Directory as a builder and contractor, shop fitter and blind manufacturer. His business address was Oxford Road, Worthing.

In December 1903 Joseph purchased 29 High Street on the corner of Chatsworth Road (where the Guildbourne Centre car park is now). He swapped the name of this house, Vainona with his old house Imrie. The 1911 census shows this house as having 12 rooms. There was a workshop at the back where the blinds were stitched and a shop in Chatsworth Road.

Joseph died aged 57 on 28 January 1914. He is buried in Broadwater cemetery. A report of his funeral in the Worthing Gazette says that he was a member of Christ Church choir. Wreaths were sent from relatives including his father-in-law John Thomson and J.G and J.J. Pitarc, business associates of his son-in-law Charles Thomson. Both Charles and John Thomson were drapers in Greenwich, Kent. I know of no connection between the two families before the marriage of his daughter Gertrude Lelliott to Charles Thomson, a year previous, but this does suggest that Charles might have originally met his wife while visiting her father on business.

In his will Joseph left his eldest son Herbert the goodwill of the business and £150 worth of stock and plant of his choosing and he was also to be given the option of purchasing the remaining plant and stock and the freehold business premises. The money raised was to be given to Joseph's widow. 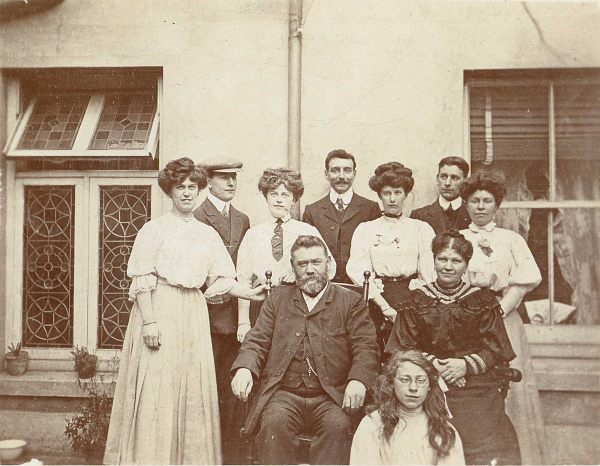 Family and Employees of Joseph Lelliott
Photo taken at back of Imrie, High Street, Worthing, about 1905