John was christened on 12 March 1830 at West Ilsley, Berkshire the son of John Thompson and Jane Hardie.

He moved with his parents back to Arbroath, Angus about 1836 but by 1851 they were again in England, living at 40 Hamilton Street, Deptford, Kent and John was a railway clerk

On 1 November 1851 at St George the Martyr, Southwark, John married Emma Goodwin. John gave his occupation as engineer. Emma was 20 years old and her father was John Goodwin, a pastry cook. She was born in Clerkenwell, East London.

In September 1852 when their first child was christened, aged eight months, at the parish church of St Alphege, Greenwich, they were living in Florence Road, Deptford and John was a railway clerk. He remained at this address until at least May 1857.

John was deeply involved with St Marks Presbyterian Church, Greenwich. In 1853 he was admitted to the communion roll. In 1856 he was appointed a deacon, a position he held until his death. He was on the finance committee and responsible for paying bills, reporting on the collection and he was also on the seat letting committee. In 1890 he became an elder and took on even more responsibility, being appointed to represent the Session at the Presbytery of London South in 1893 and 1897, having responsibility for arranging the Wednesday evening service in the absence of the moderator and taking his turn in leading the weekly prayer meeting. Mrs Thomson also appears on the communion roll.

The christenings of all his children are recorded in St Marks register except the eldest and those born between 1859 and 1863 during which time there was a change of minister and there are very few entries in the register. The new minister was the Reverend Adolph Saphir. John's seventh child, Adolph, was probably named after him and Adolph gave his eldest child the middle name Saphir. The deacons were responsible for filling in the baptismal register and many of the entries between 1864 and 1867 were made by John himself.

In 1861 John was living with his wife and children at 75 Ashburnham Grove, Greenwich, Kent, where he remained for the rest of his life. He was still a railway clerk in 1861 but by 1871 his occupation was railway storekeeper.

Emma died on 6 February 1897 and John on 15 August 1897. A touching letter of commiseration was sent to the family by the church officers.

John and Emma had 14 children, 12 boys and 2 girls, one of the girls died as a baby and two of the boys as children. 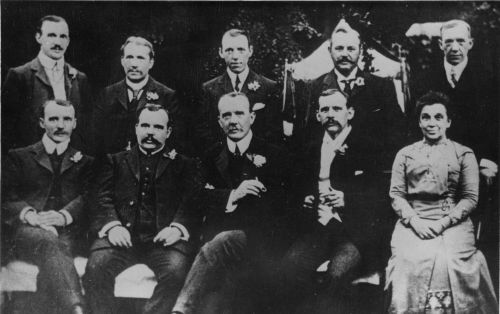 The following dates of birth and death were taken from a piece of paper which was found with Gertrude Susannah's belongings, the wife of Charles Thomson.