Adolph was born on 23 June 1862 the son of John Thomson and Emma Goodwin but I have been unable to find his birth in the GRO index. He was probably named after the minister of St Marks Church Greenwich, Adolph Saphir a in the tradition of naming the first baby to be baptised by a new minster after him.

In 1881 Adolph was a warehouseman. On 30 July 1883 at St Michael's, Wood Green, he married Fanny Louisa Leuty Polkinhorn the daughter of James David Polkinhorn, gentleman. From the census, Fanny was born at St Day, Cornwall.

By 1891 Adolph was a credit draper collector working on his own account and living at 6 William Street, Bermondsey. Only their youngest child is with them on census night.

Between 1898 and 1904 the electoral register lists Adolph's address as 88 Greenwich Road. In 1905 Adolph and Fanny were added to the membership roll of St Marks Presbyterian church, Greenwich and four of their children were baptised in April of that year. In 1908 Adolph became a deacon and temporary treasurer. He resigned in 1916. He was inducted as a deacon again in 1920 and resigned in 1927.

The 1911 census records that Adolph and Fanny had 16 children all of whom were still alive, and all but one was still residing with their parents at 41 Devonshire Road, Greenwich, a house with nine rooms. From 1916 to his death on 30 December 1935 Adolph lived at 122 Greenwich Road. Fanny is recorded in the GRO as dying in 1940. 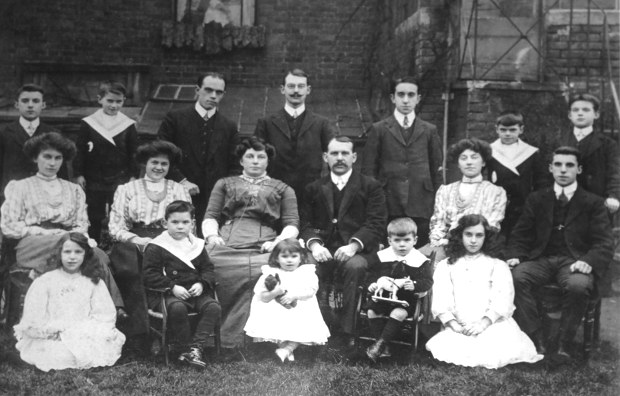 Children of Adolph and Fanny Thomson

He was baptised on 26 January 1893 at the parish church of St Mark, Deptford. In 1911 he was a confidential clerk at the office of a brewery.