Eleanor Brash. He wed Frances Duncan Hendry and lived in Edinburgh working as a joiner" />

Andrew was born on 1 March 1879 at Ironworks, Gladsmuir, East Lothian. The son of Robert Smith and Eleanor Brash. His mother died when he was four. In 1887 his father married Agnes Murray and in 1891 he was living with his father and step mother at Church Officer's House, Whittingehame, East Lothian. By 1901 he was a joiner living at 29 Lauriston Yard, Edinburgh with his brother-in-law John Bone and sisters Eliza Bone and Agnes Smith. 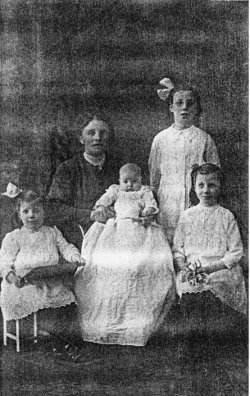 On 3 June 1905 at Cottyburn, a part of Longniddy, Gladsmuir, East Lothian Andrew married Frances Duncan Hendry. He was a joiner living at 44 Spottiswoode Street, Edinburgh and Frances was a domestic servant living at 2 Lansdowne Crescent, Edinburgh. The witnesses were J Begbie and T Scott, neither of them are obvious family members but there is a Bono Begbie included in a family photograph taken in the 1930's.

On the death of his wife's uncle, Andrew Hendry in 1906, Andrew Smith inherited the joinery business in Gladsmuir and the family moved back there for a while but by 1917 they had returned to Edinburgh, living at 24 Arden Street.

By 1938 Frances and the children still living at home had moved across the road to 67 Arden Street.

Andrew could play popular tunes on the piano by ear. He suffered many years of ill health and spent the later part of his life in an institution dying on 7 October 1952 in Edinburgh. He is buried at Colinton.

Around 1956 Frances moved to 25 Blackford Avenue, Edinburgh. This was the top flat but had its own entrance and staircase. It also had a garden, her half being furthest from the building. In the summer of 1966 she fell, breaking her hip. This was before hip replacements and she spent the last two years of her life in hospital, dying just before her 87th birthday in December 1968.