William was born in Gladsmuir, East Lothian on 1 January 1847 the son of Andrew Hendry and Elizabeth Walker.

He is recorded in the 1861 census as a farm servant living in Gladsmuir and in 1871 as a labourer, still at Gladsmuir.

On 4 December 1874 William married Mary Dobson Duncan at 2 Craigrossie Place, North Leith. By this time he was a railway porter living at 10 Calton Hill, Edinburgh. Mary was a domestic servant living at 9 Mansfield Place, Edinburgh. Her father's occupation was contractor. The witnesses were Thomas Hendry, presumably the groom's brother and Maggie Duncan

Mary was born in Westmorland, England. Her marriage certificate shows her parents to be William Duncan and Margaret Dobson but her death certificate gives her mother's name as Frances Dobson. I believe Frances is correct. (See the Dobson page for more details).

Their two children were born in Edinburgh but their son, Andrew, died aged two. 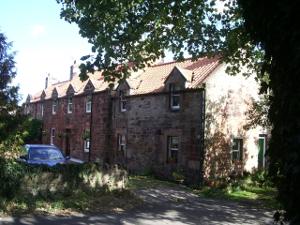 By 1891 the family had moved back to Gladsmuir and were living at Harelaw Lime Kilns, Longniddry. These Lime Kilns had stopped operating in 1887. William's occupation was given as road surface man which he followed for the next twenty years. By 1911 he was employed by the county council.

Mary died on 3 March 1912 at Longniddry. By this time her daughter and family had moved from Edinburgh back to Gladsmuir and her son-in-law was a master joiner, having inherited the Hendry family's carpentry business.

With the introduction of the tractor the demand for wooden farm carts died out and when his daughter's family moved to 24 Arden Street, Edinburgh, William went with them and became a jobbing gardener. He died on 25 November 1919 in Craiglockhart Poor House, Edinburgh.

Although his father was a joiner in Gladsmuir and some of William's brothers were employed in the business I have found no record of William ever working there.