Andrew was born in Prestonkirk, East Lothian in 1810 or 1811 the son of George Hendry and Sybil Jeffrey. His father was a farm steward.

On 30 April 1836 in Gladsmuir, East Lothian, Andrew Hendry a wright of Prestonkirk parish married Elizabeth Walker of Gladsmuir. Elizabeth was born in Pencaitland, East Lothian the daughter of George Walker and Elizabeth Richardson. Her father was a farmer and inn keeper.

Andrew and Elizabeth lived the whole of their long married life in Gladsmuir. Andrew is recorded in the census as a wright until 1861 when, from then on, his occupation is joiner. In 1851 he is also recorded as being a church officer and in 1861 he was the census enumerator for Mackmerry. He was also the parish undertaker.

Andrew and Elizabeth had one daughter and seven sons, four of whom worked in the family joinery business. Only two of the sons left male descendants. 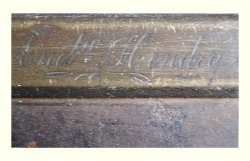 Close Up of Engraving

I do not know for certain which Andrew owned the saw pictured here. The name is engraved at the top of the blade in the centre. It is also stamped A. Hendry on the wooden handle.

Until the beginning of the 20th century the Hendrys kept the joiners shop in Gladsmuir making farm carts.

Andrew died at Gladsmuir on 12 April 1888. He had been paralysed for six months. His son George was the informant.

Elizabeth died on 4 November 1895 aged 84 also at Gladsmuir Her son Andrew was the informant.

Their eight children were all born in Gladsmuir:-